Perspectives on Climate Change Action in Canada: A Collaborative Report from Auditors General 2018

Climate change has been identified as one of the defining challenges of our time. The impacts of a warming climate and extreme weather events are already being felt in Canada and are forecast to become more severe and more frequent.  At the same time, Canada has missed two separate emission reduction targets (the 1992 Rio target and the 2005 Kyoto target) and is likely to miss the 2020 Copenhagen target as well.

Perspectives on Climate Change Action in Canada: A Collaborative Report from Auditors General

The following list summarizes the top 10 lessons we learned for collaborative audits in Canada.

What the Office of the Auditor General of Canada did

The overall objective of this collaborative project was to assess whether the federal, provincial, and territorial governments had met their commitments to reducing greenhouse gas emissions and adapting to the effects of climate change.

Provincial auditors general partnered with the federal Commissioner of the Environment and Sustainable Development and the Office of the Auditor General of Canada, which carried out audit work for the three territories in its role as independent auditor for Canada’s northern legislatures. This was the first time that so many legislative audit offices in Canada coordinated their work in this way.

The offices worked together to develop a set of common questions about climate change action to be included in the auditors’ individual work. From 2016 to 2018, they carried out this work and issued reports to their respective legislatures. Each audit office performed its work independently, with overall coordination done through the Office of the Auditor General of Canada by the Commissioner of the Environment and Sustainable Development.

The results of the individual audits were compiled in a summary report called Perspectives on Climate Change Action in Canada: A Collaborative Report from Auditors General, which was tabled in Parliament on 27 March 2018. The summary report provided an independent review of government progress on climate change commitments across the country. It provided a snapshot of key issues and trends that are common across governments and highlighted findings and examples of climate change action from the federal, provincial, and territorial audit work. The summary report included a list of questions that legislators could ask their governments on the report’s findings as well as a response to the report from the Canadian Council of Ministers of the Environment.

The summary report was provided to members of other legislative assemblies, including Nova Scotia, Alberta, British Columbia, and Nunavut. All jurisdictions issued a news release on tabling day and a webinar was conducted, with people participating from across the country. The report was also discussed at committee hearings in British Columbia and Nunavut legislatures as well as at the House of Commons. The report is still, almost a year later, referred to in media articles and other work looking into government progress on climate change in Canada. 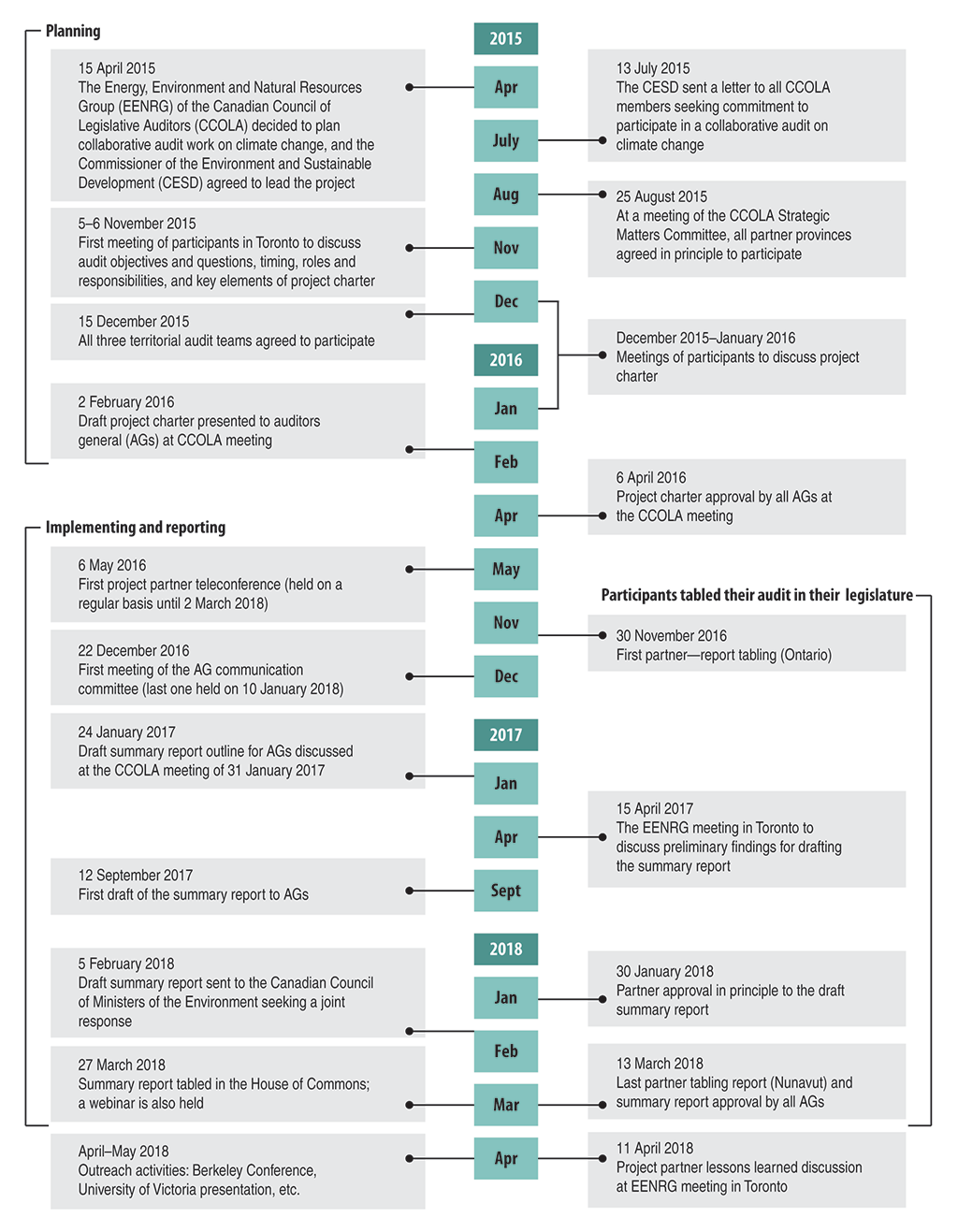 Soon after tabling, at the CCOLA meetings of April 2018, project working group members were asked for their perspective on the things that worked well and the things that could be improved with respect to the project. Additionally, later in June we asked the Canadian Audit and Accountability Foundation (CAAF) to help us survey members more formally at the working level and at the auditor general level. The CAAF prepared a list of questions to survey members from 13 June to 12 July 2018. To do so, a survey was sent to auditors and auditors general. We received responses from 10 out of 11 offices. Below are the key messages that emerged from these exercises.

Impact. The summary report provided a comprehensive view of Canada’s progress on climate change, highlighted the importance of the issue, was more credible, and had a bigger impact (including on the public and the media) than individual audits would have had. The auditors could identify common challenges and successes among governments, and Canada-wide areas for improvement. The summary report also sustained interest in the topic by referencing the individual audit office reports. Because climate change must be addressed on a Canada-wide basis, it was appropriate for all governments to participate in the audit. The webinar was a new approach that worked really well and allowed cross-Canada participation from auditors general and stakeholders.

Working together: sharing the knowledge. Some audit offices are small and have limited resources for performance audits. Working with other audit offices allowed for collaboration and sharing of knowledge related to audit approaches, the approaches each jurisdiction was taking to address climate change, and specialist subject matter expertise. Some offices told us they could not have completed an audit on this subject without the knowledge-sharing focus.

Leadership and coordination. Having one organization (the Commissioner of the Environment and Sustainable Development, in this case) lead the audit over the entire project was necessary for coordination and success. The Commissioner championed the project at a senior level; provided dedicated resources; provided valuable guidance documents for audit work; provided expertise in audit, communications, and editing; shared scientific and technical data; and created shared audit working documents. The project team also drafted the summary report using input from other auditors, the tabled reports, and the Office of the Auditor General’s writing style to create cohesion. For the release day, templates of news releases from the Communications team at the Office of the Auditor General of Canada shared with other offices was helpful for consistent messaging and communication.

Commitment at all levels. Having all auditors general buy in and sign off on the project worked well in creating support for the project from all the offices. Formal agreements developed and signed (including the project charter), including common audit criteria and minimum baseline audit questions that every partner would complete, should be repeated in future collaborative audits. Making regular presentations to the auditors general at their meeting, soliciting their feedback, and providing them with a summary of their comments or concerns was helpful.

Ongoing communication. The creation of a project working group, with regular meetings and status updates, and the establishment of timelines helped move the project along. We held monthly teleconference calls with all members. We took the time upfront, including an early face-to-face meeting, to get acquainted and discuss how to deal with differences in mandates, legislation, procedures, and work habits.

Flexibility. The work was flexible enough to allow each office to take the approach best suited to their context. Partners could choose additional objectives or questions based on their preferences, office standards, legislative requirements, and jurisdiction’s climate change priorities. Tailoring questions for each jurisdiction that can still be summarized to produce a cross-Canada comparison is a good use of audit dollars.

What could be improved

Drafting the summary report and comparability. Preparing the summary report took a lot of work and time to make sure overall comments reflected each audit office’s findings and results. An earlier, more detailed reporting framework could have helped with drafting the report. Having a more detailed project schedule related to the reporting, media template availability, timing of auditors general sign-off, deadlines for providing comments, and other end-of-project deadlines would have helped each office manage its own time requirements and further support completing the project on time.

Joint response from departments. Keeping CCME, or local ministers, informed a little earlier in the process would have been helpful. Guidelines could be improved for response requirements, and we could have better communicated what our expectations were for a response.