Home > About > Meet the Provincial Auditor 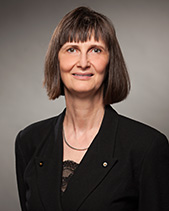 Ms. Judy Ferguson became the Provincial Auditor of Saskatchewan on June 1, 2015. Prior to her official appointment, she was the Acting Provincial Auditor from September 1, 2013 to May 31, 2015. She announced her resignation on February 16, 2021, and will continue her leadership until the end of June.

Ms. Judy Ferguson has 40 years of service with the Provincial Auditor’s Office.

Throughout her career, she held various audit positions within the Office and taught courses at the University of Regina.

She has considerable expertise related to auditing and financial reporting, and serves as a representative with several professional organizations and advisory groups, including the Canadian Council of Legislative Auditors (CCOLA).

She served on the Canadian Auditing and Assurance Standards Board from 2007 to 2013.